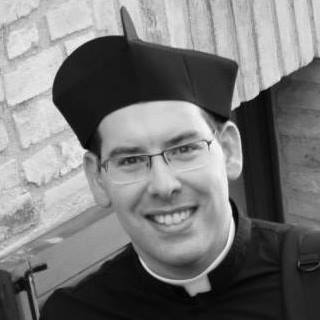 Father Matthew Hysell, M.A., M.Th., a native of Michigan, is the co-founder and current director of the Mark Seven Bible Institute.  Deaf since 18 months, he is conversant in A.S.L. and English and reads French, Latin, and Koine Greek.  In 1999 at the invitation of Fr Thomas Coughlin and with the encouragement of John Cardinal O’Connor, he joined the House of Studies for Deaf Seminarians in New York, beginning his studies at St Thomas Aquinas College in Sparkill, NY.  After transferring to Hunter College of the City University of New York, he graduated with his B.A. in philosophy in 2002 and moved to California to begin theological studies.  In 2008 he earned his M.A. (Hon.) in systematic and philosophical theology from the Dominican School of Philosophy and Theology in Berkeley, California, after successfully defending his thesis, “The Father-Son Relation in the Fourth Gospel and the Cappadocian Fathers.”  Afterward Fr Matthew took advanced graduate studies at Newman Theological College in Edmonton, Alberta, Canada, and earned his M.Th. (Hon.) degree in systematic theology in 2009 after successfully defending his thesis “The Sacramental Validity of the Eucharistic Form in Sign Language:  An Inaugural Study.”  Fr Matthew has also published articles on the sacred liturgy and on pastoral ministry with the Deaf.

Fr Matthew is a priest of the Archdiocese of Edmonton, where he serves as parochial vicar of Corpus Chrsiti Parishe and chaplain at St Mark’s Community of the Deaf as well as the national chaplain for ICDA-Canadian Section, and as a member of the Archdiocese of Edmonton Advisory Board for Deaf Ministry.  He was ordained to the transitional diaconate on 27 August 2012 by the Most Reverend +Richard W. Smith, Archbishop of Edmonton, and subsequently raised to the presbyerate the following 7 December.  Fr Matthew is the first Catholic Deaf priest ordained in Canada. 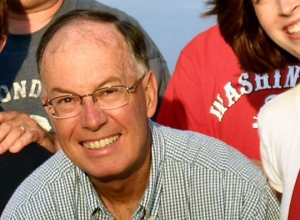 The Very Reverend Thomas J. Coughlin, O.P.Miss., M.A. founded Camp Mark Seven in Old Forge, New York, in 1981.  The first Deaf-born priest ordained in the United States, Father Tom has experienced a long and fruitful ministry in the Church, the most significant being the founder of an emerging religious community, the Dominican Missionaries for the Deaf Apostolate.

Fr Tom is a native of Malone, New York and spent his youth in Binghamton, New York, and later moved to Washington, D.C. to prepare for Holy Orders with the Trinitarian Fathers.  He graduated from Gallaudet College (now Gallaudet University) in 1972 with a B.A. in English literature (Fr Tom is a great admirer of William Shakespeare) and an M.A. in religious studies from the Catholic University of America.

In 2006, Fr Tom co-founded the Mark Seven Bible Institute at Camp Mark Seven with Matthew Hysell, the first and only Catholic Bible study camp in North America, and currently serves as our chaplain and spiritual director.

Fr Tom is now the supreme moderator and Prior General of the Dominican Missionaries of the Deaf Apostolate in San Antonio, Texas.

Fr Monty spent two years as novice in Guelph.  Afterward he earned a licentiate in philosophy (L.Ph.) at the Seminary of Mount St. Michael’s (Gonzaga University) in Spokane, WA, in 1962.  For three years in St. John, Newfoundland. after helping to open a new Jesuit High School, Gonzaga High School, between 1962 to 1965.  During this time he was also involved in Deaf ministry in St. John’s and the new Provincial Newfoundland School for the Deaf.

In 1965-1968, he went to Toronto for theological studies and continued his contact with the Deaf community there.  He was ordained to the priesthood in 1968 and obtained M.A. in theology.  Subsequently he moved to Montreal to continue his studies at L’Université de Montréal and obtained a M.A. in théologie pastorale catéchétique (catechesis in pastoral theology).

Fr Month completed his year of spirituality internship (tertianship) in 1969-1970 with the Society of Jesus where he joined Canon Charlie Hollywood, Chaplain of the Deaf in Manchester, England as assistant in pastoral work with the Deaf in that city for several months.

After a Summer of Deaf studies at Gallaudet College (now Gallaudet University) in Washington DC 1971, he began his major ministry as Ontario Catholic Chaplain for the Deaf for the Province of Ontario and was also assigned by his Provincial to the Ontario Conference of Catholic Bishops.  After 25 years traveling Ontario (averaging 45,000 km/year)–working out of Guelph,  Pickering, and Ottawa, Fr Month resigned as Ontario chaplain to the Deaf in 1996 and enjoyed a sabbatical.  In September of 1997 he was assigned to St. Ignatius Parish as an associate pastor and chaplain for the Deaf in Winnipeg where he has been until today.  He has also been Canadian Chaplain of the Canadian Section of the International Catholic Deaf Association (ICDA) for about 15 years.  From time to time he conducts retreats and missions for the Deaf in different parts of Canada and the world.

Fr Monty served as our guest chaplain and instructor during the MSBI 2011 study week/retreat.

Brother Adam Zawadzki, O.P.Miss., A.A.S., B.A., is an hearing member of the Dominican Missionaries of the Deaf Apostolate and vicar for the community’s new house of studies in St Louis, Missouri.  Brother Adam joined the staff of the Mark Seven Bible Institute in 2007 where he served as Associate Director until 2012.

A native of Indiana, Brother Adam learned American Sign Langauge at Vincenness Univeristy where he earned his A.A.S.  He joined the community in 20076 when it was headquartered in Hayward, California, and began theological studies at Queen of the Holy Rosary College in San Jose, California.  When the community relocated to San Antonio, Texas, in 2008, Brother Adam was elected subprior.  He finished his B.A. in religious sciences and philosophy at Our Lady of the Lake University in San Antionio and is currently undertaking his M.Div. studies at Aquinas Institute of Theology in St Louis, Missouri.  He made his perpeutal profession in August of 2010.